The Joyful Children of Modern Life 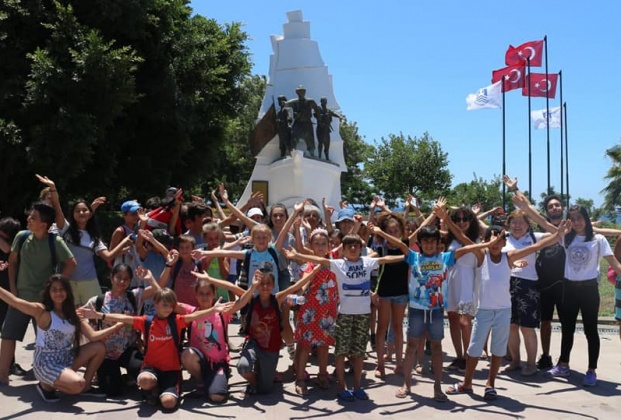 The ÇYDD Bodrum Branch is keeping busy with its summer activities. Every week on Fridays, trips take place on which the children visit the most interesting places on the Bodrum Peninsula and learn new things while having fun.

On Friday mornings little hearts go pitter-patter.  The children get ready with anticipation and run to the pick-up points without even stopping to tie their shoe laces.  The Bodrum Municipality bus picks up the children from the Bodrum center, Konakcık and Gümbet to take them to Bitez Pazaryeri Municipality Facility.

Pazaryeri Municipality Facility rings with children’s voices on Mondays, Tuesdays and Wednesdays too actually.  The Bodrum Branch summer activities start at 10:00 am with sports. The joyful children then bring to life their fantasies with paint, knead clay to produce ceramics, sing happy songs, write stories about their dreams and play games.  They also make toys that develop their skill in using their hands, play chess, do theatre, dabble in philosophy, learn coding, and experiment with science to learn how to think, explore ideas and work with computers.

However, Fridays are different.  The bus that brings them in in the morning doesn’t leave after it drops them off at the facility.  On Fridays, the students and their instructors go on a trip.  They check their hats, water bottles and walking shoes once again.  Their picnic lunches are carried to the bus.

The latest trip started by visiting Gümüşlük.  They went around in Batık Kent and walked on the king’s road.  They learned about the city of Myndos in antiquity.  It is more fun to call this place the Rabbit Island.  When everybody walked over to the Rabbit Island and saw the water, for sure everybody got wet.  Did they see any rabbits?  Not our joyful bunch.  But we saw the children hop around the place as happy as bunnies.

When the fun was over and everybody got changed and dried off, the next destination was the Sabancı Park.  The historical naval chieftain Turgut Reis was commemorated in front of his monument. It was lunch time by then.

For the ÇYDD children who know how to have a good time even on the bus with games and songs, the next stop was at Turgutreis ÇYDD Darius Geransar Cultural Center. Volunteers met everybody and showed them around the place.  When the children learned everything about the activities at the center, they were offered ice-cream. You can imagine what it’s like to have so many children take over a place. But the real surprise was the visit to the Turgutreis Animal Shelter. When animals were added to the mix happiness was heard loud and clear.  During feeding time the children stayed with the animals and petted them. The rescue dogs at the Turgutreis Animal Shelter had their fill of love and attention.

At the end of the day, tired, their cheeks red with exertion but their eyes still shining with excitement, the happy children of ÇYDD scattered off the bus like a handful of marbles.

The ÇYDD Bodrum Branch Summer Activities are in their third week!