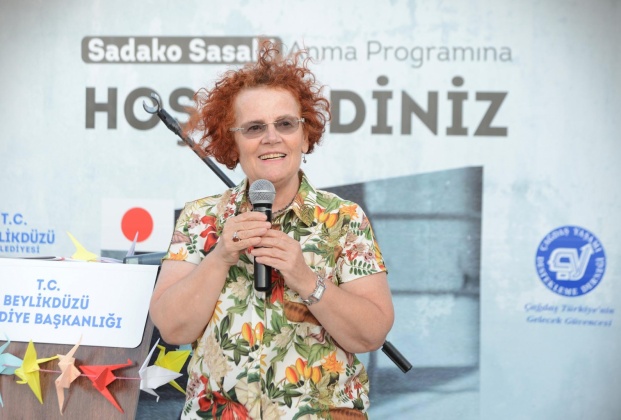 On the 74th anniversary of the Hiroshima Massacre, a commemorative ceremony was held at the Japanese Garden created within the Life Valley Park of the Beylikdüzü Municipality in Istanbul.

To commemorate the 300,000 people killed at Hiroshima and Nagazaki, the ÇYDD Kuşadası Branch students acted out the story of Sadako Sasaki who died at 12 years old due to the illness she developed with the effects of radioactive fallout from the atom bomb.  The audience experienced emotional moments.

To draw attention to the importance of peace and to be able to leave children a bright future, the ÇYDD Beylikdüzü Branch, together with contributions of the Beylikdüzü Municipality, held the commemorative program at the Japanese Garden of the Life Valley Park.  This year, once again the garden was decorated with paper cranes made by children. The children evoked peace by folding the cranes Sadako Sasaki wasn’t able to complete.   Beylikdüzü Deputy Mayor Serdal Mumcu, ÇYDD President Ayşe Yüksel, Beylikdüzü Municipality executives, ÇYDD representatives and audiences attended the ceremony.

With his speech, the Deputy Mayor Serdal Mumcu expressed the fact that, “The true victims of the war were the innocent children. When Sadako started folding paper cranes to help her heal, she must not have imagined that one day she would be commemorated like this.  She only dreamed of a serene life and a serene world. She was not able to complete the 1000 cranes she wished to fold, however, since 1955 her friends and children have been sending cranes to the skies in the name of peace.  We believe, children will continue to work for a warless and peaceful world in the name of Sadako and all other war stricken children. Today, we honor the memory of Sadako and all other children who died in war.

I thank the ÇYDD management who helped prepare the commemoration ceremony, for making us a part of this very meaningful event”.

Yüksel said, “To live in peace is children’s right”.  In her speech Yüksel expressed that the sad event that took place 74 years ago has now brought the people of the world together and it has led to children holding hands and dreaming of peace.

Yüksel continued with the words, “Children are our future.  To live in peace is the right of all the children of the world.  How happy we are to know that we are the children and grandchildren of our great leader Mustafa Kemal Atatürk. We all grew up with his maxim ‘Peace in the Country, Peace in the World’. May peace reign everywhere in the world. We are going to continue to walk in Atatürk’s path. I congratulate our branches, the ÇYDD Beylikdüzü Branch President Sebahattin Çılbır and everyone that has helped carry out this event”.

Following the poetry reading and musical recitals by students, the dramatic presentation of the story of Sadako Sasaki by the ÇYDD Kuşadası Branch students was received with admiration.  At the end of the program, the participating students received plaques from the ÇYDD and from the Beylikdüzü Municipality Executives.  The ÇYDD Beylikdüzü Branch President Sebahattin Çılbır expressed his thanks to the ÇYDD Headquarters, the Beylikdüzü Mayor Mehmet Murat Çalık and municipality executives for their contributions to the ceremony.